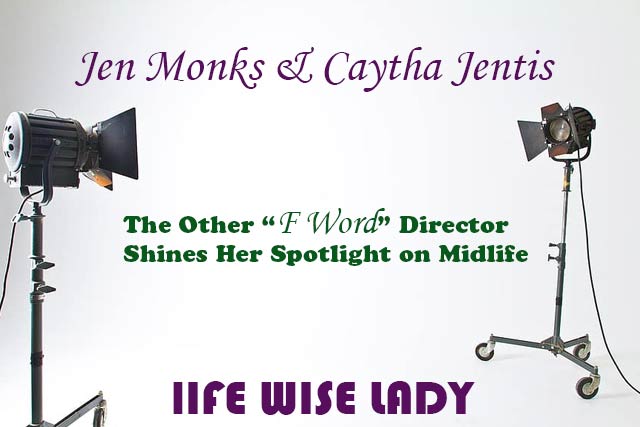 Throughout her career as an award-winning filmmaker, writer, and director, Caytha Jentis has focused her attention on stories of interest to moms and women in general. In her latest project, the popular Amazon series The Other F Word, she shines her spotlight on midlife and the joys and pains that come with it. While the ‘F’ could stand for the word forty or fifty, it might just as well stand for fun or friendship or fearlessness.

The show humorously addresses the issues near and dear to women over forty who are, as a group, woefully neglected by the entertainment industry. Caytha’s main characters attempt to navigate the ever-changing landscape of the middle years with help from well-known actors like Judy Gold, Steve Guttenberg, and others.

I spoke with Caytha Jentis about the series and the difficulties she encountered launching it. Not surprisingly, she faced an uphill battle getting this project off the ground. Yet, her grit and determination paid off; to the benefit of fans around the world.

Jen Monks: What was the inspiration behind The Other F Word?

Caytha Jentis: I was looking for the next great story to tell. My two kids were getting older, and I said, “Wow, this is a really interesting chapter in life.” Parenting older children or becoming an empty nester wasn’t anything that was being covered episodically at that point. My kids were coming of age, and I felt like I was, in a way, coming of age too.

JM: What reaction did you receive from your industry when you were pitching the show?

CJ: I just want to acknowledge that selling television is hard for everyone. Even Norman Lear had a tough time selling a show that dealt with older people. I was routinely told my idea was good, but I was pitching a tough demographic. Ay first, I didn’t know what that meant. It’s code for, “Your characters are too old.”

The other thing I ran into was a perception that my demographic watches traditional television, but they’re not on YouTube, and they’re not using digital content. It’s a fallacy that we don’t watch or can’t figure out how to stream Amazon.

JM: Why do Hollywood executives avoid series aimed at women over forty?

CJ: I had this profound realization that, in this industry, you are either prey or you’re put out to pasture. There is a little space for women like Sarah Jessica Parker or Reese Witherspoon, who have broken through.

I don’t think it’s all entertainment’s fault, per se, but it’s just this larger thing. Advertisers don’t want their sexy Lexus next to a commercial about Depends. Besides, advertisers don’t think they need to court us. They think we will just buy it regardless.

“In this industry, you are either prey, or you’re put out to pasture.”

JM: Has it been difficult to find sponsors for your show?

CJ: No, but some brands stay away from my type of material. My characters sometimes swear and talk about sex toys. I want to tell my stories fearlessly. Many companies don’t respond to that.

JM: What kind of reception have you received from your audience?

CJ: I’ve been overwhelmed by it. The success has been huge. We have been able to reach nearly a million people. And you have to go directly to Amazon to watch the show, so it’s amazing to me. With a minimal marketing budget, we have been able to grab so many people.

I feel like our success is a success for all women in this pivoting and reinvention phase. If I can persevere with this impossible dream, then maybe I can inspire others.

JM: What type of show is The Other F Word, and what topics do you cover?

CJ: I wouldn’t call it a comedy. It’s humorous, but it’s totally driven by drama. There are so many relevant themes going on. The four main characters deal with death and parenting and separation and health. It’s about change and transition.

JM: How has created this show affected you?

CJ: I used to write to run away from my life. Then I began to look into my own world and experiences for material.

I have been so profoundly changed by the people I have met. It’s been a great place to be positive and open a dialogue. And many of the themes we cover are universal. All generations can connect with our stories.

JM: What advice would you give people who want to reinvent their careers?

CJ: Do your homework. You need to have passion and fearlessness. Don’t be afraid to cry and get up and go for it again. It’s now or never.

JM: You recently released season two of the series. How can we ensure there will be a season three, four, and five?

JM: You recently released season two of the series. How can we ensure there will be a season three, four, and five?

CJ: My simple ask is to watch the show, and if you like it, share it with your friends. There’s nothing else out there like it.

Things are beginning to change for our demographic, and women are all a part of that. Hopefully, if we keep driving these big numbers, we can’t continue to be ignored.